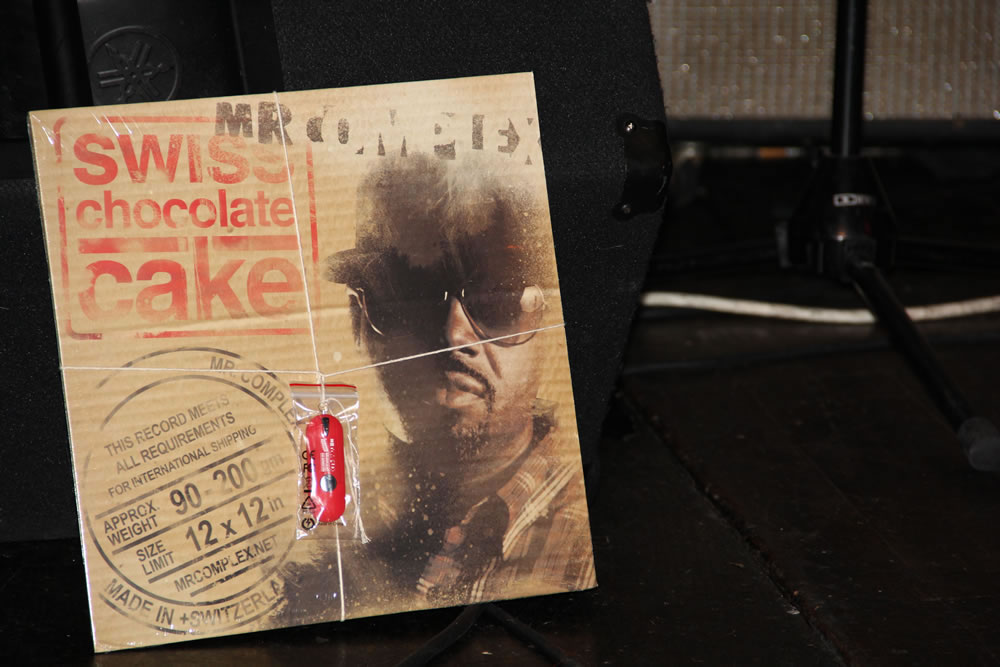 Drom, was the place to be this past Thursday as the music series Uncomun, presented by Nevaris and Maya Azucena, paved the way for the release of the album “Swiss Chocolate Cake” by Mr. Complex. The night was HOT…figuratively and literally! The packed NYC East Village club held in the heat and as the night went on, it only got hotter, as each artist took to the stage. The verve that filled the room created an awesome night of music that included a screening of Complex’s video’s “Holy Smokes” and Pharoahe Monch’s “Still Standing”. The short film “Fanatic” by Complex also made it’s debut.

Mr.Complex is a multifaceted artist whose name fits him to a T. His unique balance of working in front and behind the scenes has enabled him to create a solid brand around himself that showcases his talents as a  recording artist, performer, director, actor, author and entrepreneur. Since the mid 90s, Complex has toured the world performing hip-hop and with loyal fans, has developed a cult following. He has released four solo albums and two more with the Polyrhythm Addicts.

In addition to his music career, Mr. Complex holds a couple of degrees. He has one in advertising from New York City Technical College and another in film studies, from the New York Film Academy. Whether he is on stage rockin’ the mic or working as a film producer and director, Complex always manages to deliver.

If you didn’t have a chance to make it to the show at Drom, here’s some of what went down.

Rawhead and Midas from Sub-Bombin Records,  hit the turntables and warmed up the crowd for the big night ahead.

First up was Brooklyn’s own Maya Azucena, whose beautiful blend of soul, jazz, hip-hop and reggae, delighted the audience with positive energy. In a room that was heavily populated with fans of old school hip-hop, she had no problems adding to it and going beyond with her solid fusion of sound.  Maya Azucena’s band included Chris Rob (Keyboards &Vocals), Ivan Katz (Drums) and Christian Ver Halen (Guitar).

Next on stage was Dres from Black Sheep, who immediately got the crowd involved when he performed one of the all time greatest hip-hop anthems, “The Choice Is Yours”. Jarobi from A Tribe Called Quest, joined forces with Dres on stage to perform music from their group Evitan.

Shortly after 11pm, it was finally time for Mr. Complex to hit the stage.  From the first note of band, Complex had the full attention of the room with his seamlessly delivered rhymes. He took us on a musical journey and rocked us with some of his old school and new school joints. Some of the songs performed were, Calm Down, Underground Up, Visualize, Stabbin’ You and Holy Smokes. To end off his set, he gave us a verse of King Kong Love, which is a new song that will be on his next album, Forever New. He truly brought his A game to Drom and gave everyone what they came for, which was a fun night of great hip-hop! Joining Complex on stage were special guest’s Pharoahe Monch, along with Shabaam Sahdeeq and Tiye Phoenix from the hip-hop supergroup Polyrhythm Addicts. Complex’s band included, DJ CroSsphada (Turntables), El Fudge (Hypeman), Nadine Michel (Vocals) Malaika Schmidt (Bass) and Don McKenzie (Drums).

Swiss Chocolate Cake was released on Sub-Bombin Records on February 28. True to form, Complex brought his old school vision to the present by releasing the album on vinyl, but also including a USB Drive that comes with videos, the album download, bonus tracks, & more. You can get a copy of Swiss Chocolate Cake at Fat Beats in Brooklyn and iTunes. Stay up to date with Mr. Complex by visiting Yard Stick Flicks.

Check out some pics from the Swiss Chocolate Cake Album release at Drom.