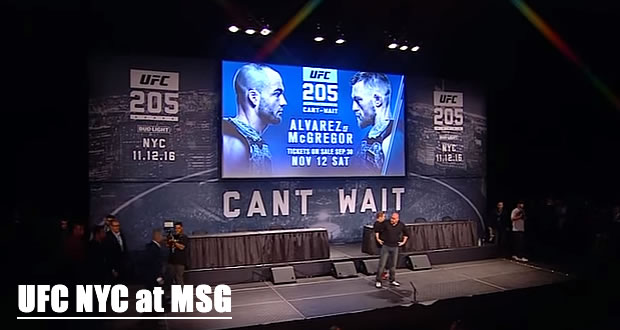 For those of us who are huge fans of MMA and live in New York, we’ve been waiting for what seems like eternity for the first mixed martial arts event to take place in New York City. Thanks to the UFC and the forces that be our wish will come true on November 12, when UFC205 comes to Madison Square Garden.

Fight fans are going to be in for a real treat when one of the most popular MMA fighters in the world, Irishman Connor McGregor faces off against Philly’s own, Eddie Alvarez in the main event at UFC 205. McGregor is the current UFC Featherweight Champion and Alvarez is the current UFC Lightweight Champion. The fight card which is being billed as one of the biggest in UFC history will feature three different Championship title bouts.

Newly crowned UFC Welterweight Champion Tyron Woodley will defend his title belt against Stephen Thompson and in the women’s Strawweight division, the Champ Joanna Jędrzejczyk will square off against her fellow country mate Karolina Kowalkiewicz.

Before the fight, find out more about who the current UFC Champions are and get a better understanding of the different weight classes by checking out the WhoHoldsTheTitle.com

The UFC which is widely known as the premier organization in the world for MMA has fought long and hard to overturn New York State’s ban on the sport and they’ve done it.

Here’s the list of fights that are scheduled for UFC205 at Madison Square Garden.

See you on fight night at MSG.