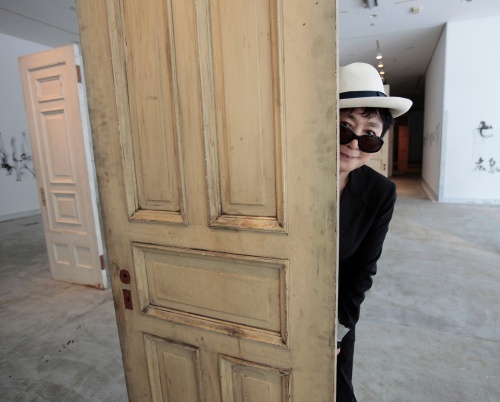 The Yoko Ono exhibition, titled “Uncursed, is an installation of nine doors and figurative transparent sculptures which form the nucleus of her second solo exhibition at Galerie Lelong. “These are the doors that we opened and closed to go through life,” Ono explained. “There were many doors that blocked us. But we opened them, and we went through. This is the journey to uncurse yourself.”

Ono’s New York show includes elements of the work created for her exhibition at the Hiroshima City Art Museum of Contemporary Art in Japan. The exhibition will be open from October 28 – December 10.

When we were children, we learnt at our elementary school how the warrior, Shikanosuke Yamanaka, vowed to endure seven misfortunes and eight sufferings, thereby giving all the negative things to him that would have been given to the people of his city. I was so impressed with his selfless devotion to people, I wanted to be like him when I grew up. Then I realized that so many challenging situations were given to me in life. Much later, I wondered if it would not be better to ask for seven good fortunes and eight treasures….which I promptly did. It changed my life.

In my recent exhibition THE ROAD OF HOPE in Hiroshima, the city of the only country which suffered a nuclear disaster twice in the same century, I offered blessings to the people of Hiroshima and prayed that they would be given seven good fortunes and eight treasures.