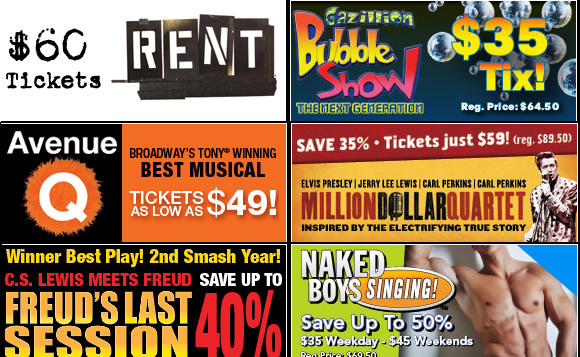 Discount Tickets to Off- Broadway Shows

Naked Boys Singing!
Save up to 50% off regular ticket price
After nearly 12 years of success off-Broadway, Naked Boys Singing still draws a crowd. The eight-man cast bare it all and see quite comfortable doing it. From the opening song until the end, the men are in the nude. The show features a 16-song cabaret-style musical revue, including songs like “Bliss of a Bris,” “Nothin’ But the Radio On” and several other titles that cannot be printed here.

Avenue Q
Tickets as low as $49
AVENUE Q is a laugh-out-loud musical that tells the timeless story of a recent college grad named PRINCETON who moves into a shabby New York apartment all the way out on Avenue Q. There, he meets KATE (the girl next door), ROD (the Republican), TREKKIE (the internet sexpert), LUCY THE SLUT (need we say more?), and other colorful types who help PRINCETON finally discover his purpose in life!

Freud’s Last Session
Save up to 40%
Freud’s Last Session centers on legendary psychoanalyst Dr. Sigmund Freud, who invites a young, little-known professor, C.S. Lewis, to his home in London. Lewis, expecting to be called on the carpet for satirizing Freud in a recent book, soon realizes Freud has a much more significant agenda. On the day England enters World War II, Freud and Lewis clash on the existence of God, love, sex and the meaning of life – only two weeks before Freud chooses to take his own.