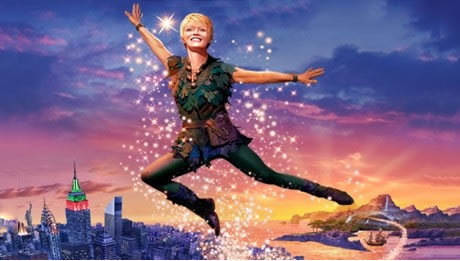 The actress and former Olympic gymnast Cathy Rigby, will be reprising her signature role in a new production of Peter Pan this holiday season at The Theater At Madison Square Garden. Discover the magic of this two-time Emmy® award winning and two-time Tony award nominated production when it comes New York City.

Peter Pan is an adaptation of Sir James M. Barrie’s story about a boy who never grew up. The three children of the Darling family receive a visit from Peter Pan, who takes them to Never Land, where an ongoing war between Peter’s gang of rag-tag runaways and the evil Pirate Captain Hook is taking place.

Peter Pan is filled with timeless magical moments and a captivating hook. The legend you thought you knew, is now the adventure you never dreamed possible…Cathy Rigby is Peter Pan