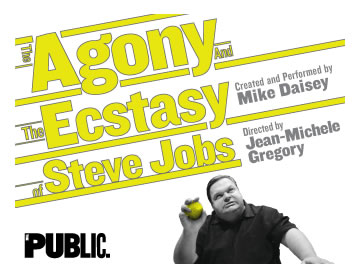 A one-man theater piece entitled, “The Agony and the Ecstasy of Steve Jobs” will be performed by Mike Daisey at the The Public Theater with previews starting on Oct. 11, with an opening set for Oct. 17. Daisey is a stage performer that has toured the country with his monologue shows.

Right now, he is currently working towards making critical adjustments to the play in regards to points of view between the relationship of Apple and factories in China.

In a release sent out this week, Oskar Eustis, the artistic director of the Public Theater, said “it is inevitable that reality and drama will intersect in surprising, sometimes uncomfortable ways. This isn’t to be regretted; it’s to be celebrated.”

On October 5, 2011, Steve Jobs died in California at the age of 56, seven years after being diagnosed with pancreatic cancer. His fans and many people around the world are in mourning from the loss of one of the most genius, creative, innovative, and visionary people of all times.

The Public Theater, a New York City arts organization that showcases the works of up-and-coming playwrights and performers has already started to sell tickets.The Regular Price for a ticket is $75-$85 but, if you are a member of The Public Theater you can purchase tickets for $40.

THE AGONY AND THE ECSTASY OF STEVE JOBS
Created and performed by Mike Daisey
Directed by Jean-Michele Gregory
October 11 – November 13, 2011

Previous: A Perfect Saturday in the Neighborhood of North Williamsburg
Next: First Bolivian Parade of New York