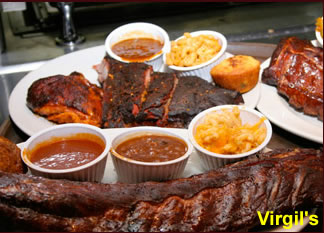 The McRib Sandwich has been trending and making a comeback but, there are plenty of other places to get tasty Ribs, in New York City other than McDonald’s. If you are a fan of barbecue ribs,  here are five restaurants in NYC that you should try, Fette Sau, Dinosaur Bar-B-Que, Virgil’s, Blue Smoke, and Fatty ‘Cue.

Williamsburg’s Fette Sau (“fat pig” in German) is a Zagat rated barbecue restaurant owned by Kim and Joe Carroll who also own beer bar Spuyten Duyvil.The head chef Matt Lang, offers a menu of pork, beef ribs and shoulders, pigs’ tails, flank steak, leg of lamb, pork belly, and pastrami, all sold by weight and served on butcher paper, sauce on the side.

Dinosaur Bar-B-Que has been nationally acclaimed as one of the best in the country. Their menu is firmly rooted in the traditions of Southern bar-b-que.

Virgil’s Home-style BBQ restaurant is located in the heart of Times Square and is known for exceptional barbecued ribs, chicken, brisket, lamb, and pork.