Urban farms in New York City are growing and giving us better options for fresh produce in the city. There are several farms in the city that include Battery Conservancy, Gotham Greens, Brooklyn Grange, Eagle Street Rooftop, Tenth Acre Farms and Added Value. These farms have been providing quality supply to New York City restaurants and markets as well as using farming, to help educate and improve the lives of youth in the city.

Brooklyn Grange is a large rooftop farm that spans some 40,000 square feet and is atop a former industrial building in Queens. The farm focuses on growing organic produce from herbs to beets to beans and many other vegetables. You can find fresh produce from Brooklyn Grange at Roberta’s in Brooklyn, Brooklyn Flea Smorgasburg, and at the farm, 37-18 Northern Blvd at 38th St Map it.

Eagle Street Rooftop is another Greenpoint Brooklyn organic vegetable farm. The farm has a market onsite as well as delivery of produce by bicycle to local eateries such as Champion Coffee, Eat, Marlow and Sons, Paulie Gee’s, Sprizenhaus, and Eastern District. Their 6,000 square foot green roof operation is located on the East River offering a sweeping view of the Manhattan skyline.

Battery Conservancy  has a small organic farm that is located at the tip of Manhattan right across the street from the South Ferry. They grow everything from tomatoes, eggplants, cucumbers and carrots to husk cherries, pumpkins, and basil. Their farms currently serve over 680 K-12th Grade students from 8 different downtown schools provding them fresh local produce and educational programs about farming.

Added Value located in Red Hook Brooklyn, is a non-profit farm that has created opportunities for the youth of South Brooklyn by expanding their knowledge base and development skills through urban farming. They will be celebrating their 2011 Harvest Festival on Saturday, October 22nd, from 10 am to 4 pm, at Added Value’s Red Hook Community Farm, across from IKEA. Enjoy seasonal foods from local restaurants iCi, The Good Fork, Kevin’s, and more.

Tenth Acre Farms in Greenpoint, Brooklyn take the idea of  “locally grown” very seriously and are commited to growing their vegetales 100% organically. Their market is closed for the year but, keep an eye out for them next year. 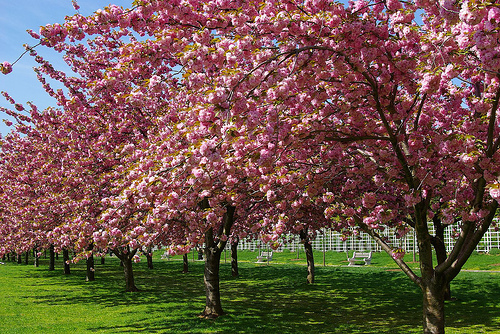