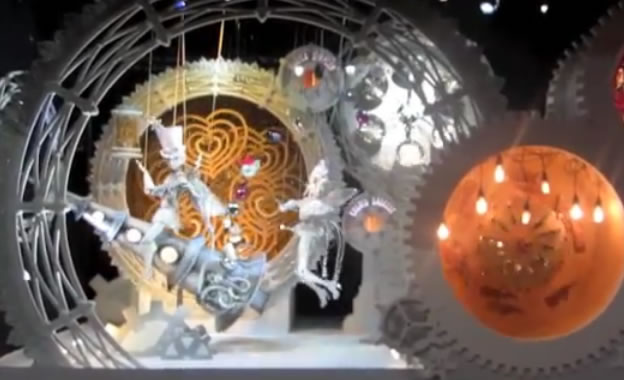 Cruising around New York City in search of some of the most creative window displays that bring Christmas stories to life, are always a fun thing to do around the holiday season. The elaborate designs and animated scenes all tell a story that is both entertaining and filled with holiday splendor.

There is no cost to window shop, so go out and enjoy a family fun holiday tradition.

Lord & Taylor Holiday Window
424 Fifth Avenue (at 39th Street) Map it
This years theme was inspired by children from NYC schools and Women in Need Shelters. 125 pieces of their work will be on display.

Saks Fifth Avenue Holiday Window
611 Fifth Avenue (at 49th Street) Map it
It’s a Snowflake and bubble spectacular at this fifth avenue window display that includes a two minute light show beamed off the facade of the building every quarter hour. Props in the stores 12 windows include dresses from designers, Stella McCartney and Alexander McQueen.

Macy’s Holiday Window
151 W 34th Street, Herald Square, Broadway between 34th and 35th Streets Map it
Their many shades of white, leaves more to the imagination for the passerby.

Barneys New York  Holiday Window
660 Madison Avenue (at 61st Street) Map it
The cult of Lady of Gaga is in full effect as the windows depict four of her themes: Gaga Constellation, Gaga Machine, Gaga’s Boudoir and Gaga’s Crystal Cave. The windows are presented in conjunction with Gaga’s workshop, a themed boutique on the fifth floor.