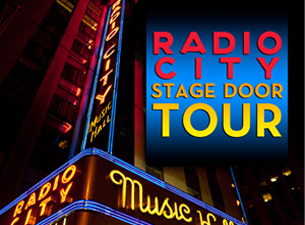 Explore the theater, lounges and corridors of the most iconic theater in New York Radio City Music Hall and have a chance to meet a Radio City Rockette! Starting today, the Radio City Music Hall will be presenting the Stage Door Tour. Go behind-the-scenes and get an insider’s view of New York’s iconic entertainment venue where the biggest names in show business perform!

Highlights of the “Stage Door Tour” include:

The Great Stage
Designed by Peter Clark and is one the most innovative and technically advanced stages in the world.

The Wurlitzer Organ
The organ has two independently working consoles, one on each side of the stage. The pipes are housed in 11 different rooms on both sides of the building. It also has a full set of percussion instruments: chimes, drums, woodblocks and even a concert piano. The organist, from his console, can play these instruments and actually create the sound of a full orchestra.

Samuel Lionel “Roxy” Rothafel
He traveled to Europe to study the designs of some of the world’s great theaters and came up with the vision for the auditorium in the Music Hall.

Rockefeller Center
Rockefeller Center, the site of the famous Rockefeller Center Christmas Tree, is a 19-building complex between 47th and 52nd Streets, from Fifth Avenue to midway between the Avenue of the Americas and Seventh Avenue. It is one of New York’s biggest attractions.

Daily Tour tickets can be purchased at the 51st Street Tour Entrance located on 51st Street between 5th and 6th Avenues. Tours leave approximately every half hour.

The Rockettes “Magical Journey” is a New York City tradition around the holidays. The show runs until January 2.