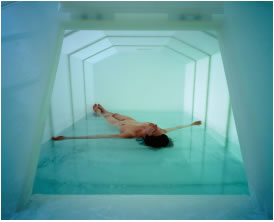 Included in the exhibition is a recreation of Höller’s Experience Corridor, where viewers are invited to undertake simple but affecting tests on themselves. The exhibition will encourage viewers to test a variety of sculptural experiences.

In Höller’s Psycho Tank (1999), visitors will float weightlessly in a sensory deprivation pool, providing a strange out-of-body experience. In these scenarios, as in his other work, Höller treats the viewer as the subject and audience for his radical and disorienting experiments.

Since the opening of the exhibit on October 26, there’s been some changes in the Psycho Tank installation. According to the New York Post http://nyp.st/tBrHNo, the Department of Health warned the museum that Psycho Tank doesn’t have the prerequisite permits the city demands of bathhouses. As a result, the New Museum has enforced a strict one-person-at-a-time rule for Psycho Tank, which previously enabled 6 viewers to be in the pool at the same time.

The Post reports the City is also looking at Höller’s installation that includes a 102-foot Slide that runs from the fourth floor to the second floor of the gallery to see if it is up to code.

Over the past twenty years, Höller has created a world that is equal parts laboratory and test site, exploring such themes as childhood, safety, love, the future, and doubt.

Höller left his early career as a scientist in 1993 to devote himself exclusively to art making, and his work is often reminiscent of research experiments. His pieces are designed to explore the limits of human sensorial perception and logic through carefully controlled participatory experiences. The Carsten Höller exhibition will be on display until January 15, 2012.