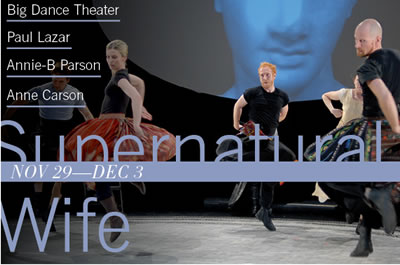 “Supernatural Wife” Part of the Next Wave Festival

The Next Wave Festival at BAM (Brooklyn Academy of Music) is a festival which promotes and showcases the work of young and emerging artists. On November 29,’Supernatural Wife’ by director and choreographer Paul Lazar and Annie-B Parson will makes it New York Premier.

The play is taken from the mythic tale of a King, who avoids death by arranging to send a surrogate to the world below in his stead. His wife volunteers. At its core Supernatural Wife is about big complex ideas: our desire to live, against the immutability of mortality; our desire to be autonomous in the face of our undeniable inter-connectedness; and the playful nature of theater against the innate tragedy of reality. Sourcing and re-thinking the pulsing, profound nature of dance and music in tragedy, the Chorus will restore dancing to its rightful place in Greek drama.

Supernatural Wife
Based on Alkestis by Euripides translated by Anne Carson