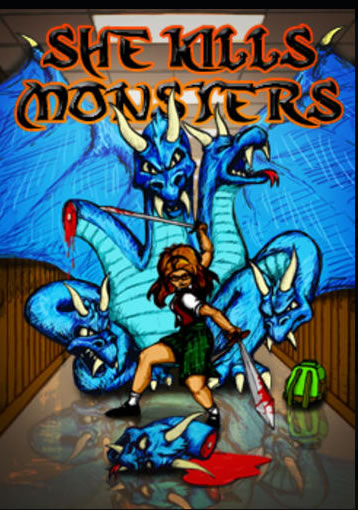 She Kills Monsters at The Flea Theater

She Kills Monsters, by Playwright Qui Nguyen, is a comedy that is about people who play fantasy games like like Dungeons & Dragons. The play is directed by Robert Ross Parker and features a cast drawn from The Bats, the resident acting company of the lower Manhattan Off-Off-Broadway organization at the Flea Theater.

In SHE KILLS MONSTERS, Average Agnes is finally leaving her childhood home following the death of her totally weird sister, Tilly. When she stumbles upon Tilly’s Dungeons & Dragons notebook, however, Agnes embarks on an action-packed adventure to discover more about her sister than she previously cared to know. A high-octane comedy fraught with hostile fairies, randy ogres, and ‘90s pop culture, She Kills Monsters is a heart-pounding homage to the badass (& geek) within us all.

The schedule is Tuesday-Saturday at 7 PM and Saturday & Sunday at 3 PM. All Tuesday performances are Pay-What-You-Can (one ticket per person; subject to availability at the door only) and Saturday matinees are $10. Get Tickets $10 – $25.