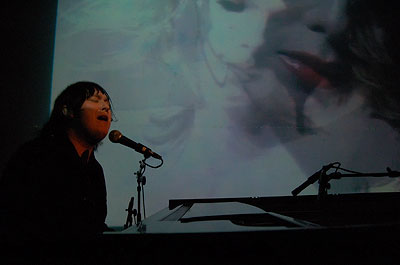 Antony and the Johnsons – Swanlights

The Museum of Modern Art has commissioned artist/musician Antony to conceive, produce, and perform a large-scale concert and performance event, Swanlights, with Antony and the Johnsons, on Thursday, January 26, 2012, at 8:00 p.m. at Radio City Music Hall.

Featuring a 60-piece orchestra, the performance piece is conceived as a new commission especially developed for the January 26 performance, and an evolution of the highly acclaimed The Crying Light, which was presented at the Manchester Opera House for the 2009 Manchester International Festival.

Envisioned as a meditation on light, nature, and femininity, Swanlights includes songs from all four of Antony and the Johnsons’ albums (self-titled, I am a Bird Now, The Crying Light, and Swanlights), set to symphonic arrangements by Nico Muhly, Rob Moose, and Maxim Moston. It is produced in collaboration with light artist Chris Levine, lighting designer Paul Normandale, and set designer Carl Robertshaw.

Award-winning New York musician and performer Antony Hegarty, is best known for his atmospheric and delicate compositions. He has collaborated with a wide range of artists and musicians that include: Rufus Wainwright, Lou Reed, CocoRosie, Laurie Anderson, Yoko Ono, Boy George,  Bjork and has performed with major symphony orchestras around the world.

Antony and the Johnsons: Swanlights is organized by Klaus Biesenbach, Chief Curator at Large of The Museum of Modern Art and Director of MoMA PS1, with the assistance of Eliza Ryan, Curatorial Assistant, MoMA PS1.

An accomplished visual artist, Antony has exhibited drawings at Palais Des Beaux Arts in Belgium, Isis Gallery in London, Accademia Albertina in Turin and the Triennale in Milan. Antony’s drawings will be exhibited at the Hammer Museum in Los Angeles in January 2012, curated by James Elaine.

Tickets to Antony and the Johnsons: Swanlights are on sale now. Contact Ticketmaster phone charge at 1-866-858-0008 or purchase online at Ticket Master.

Previous: Harry Connick, Jr. back on Broadway
Next: Photos from Medeski Martin & Wood show with Antibalas