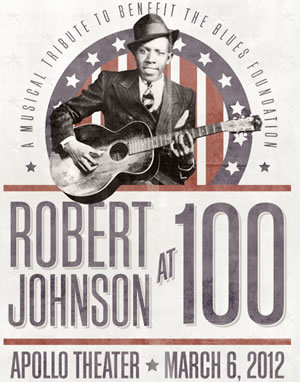 On Tuesday March 6, 2012, The Apollo Theater will host an All-Star musical tribute to the man know as the King of the Delta Blues Singers, Robert Johnson. This special evening is a fundraiser to assist with the building of the Blues Hall of Fame by the Blues Foundation in Memphis, Tennessee.

The tribute to Robert Johnson is in celebration of his 100th birthday. The current line-up for the concert, with more to be announced includes, The Roots, Shemika Copeland, Bettye LaVette, Taj Mahal, Keb Mo, Sam Moore and Todd Rundgren.

Robert Johnson was born in Mississippi where he learned to sing and play the blues. His music has influenced rock stars of the greatest magnitude – the Rolling Stones, Bob Dylan, Eric Clapton, the Allman Brothers and more.

Tagged with: For Charity Manhattan