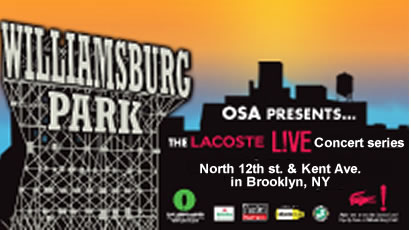 The Williamsburg Waterfront is no longer home to the the Open Space Alliance (OSA) summer concert series. They now have a new home Williamsburg Park, that has the makings of another great outdoor concert venue for New York City. The 2012 concert line up keep’s getting better and currently includes, Jane’s Addiction, Sublime with Rome, Cypress Hill, Cake, and My Morning Jacket.

With the change of venue, comes a new name for the concert event which is now known as, The LACOSTE L!VE Williamsburg Park Concert Series. They will have up to 20 shows this summer with close to a third being FREE.

Williamsburg Park will not have the river view or Manhattan skyline but, it may be worth the trade as there will also be no state troopers and an open area for beer consumption. The park capacity will also be standing at approximately 7000 as compared to 5000 at the waterfront. The new location is only a block away from the waterfront venue on North 12street.

June 15
Show:5:00pm
As part of the Northside Festival,Jens Lekman, of Montreal, The Thermals,