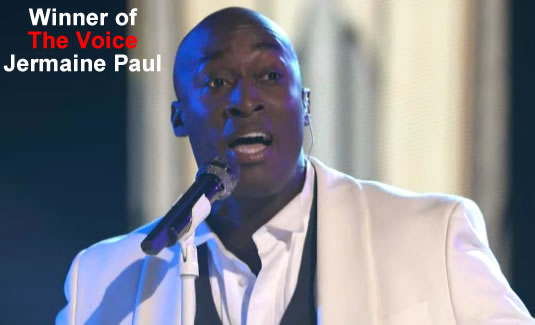 Jermaine Paul from Harriman New York, took home top honors on season two of the singing competition, The Voice on NBC. Paul was on country star Blake Shelton’s, Team Blake and every week his performances got stronger as the unlikely pair combined their talents to arrange a series of songs that put him in position to win the show.  R Kelly’s, ‘I believe I can fly’, was the song that catapulted Jermaine Paul to victory on The Voice.

Paul, who has been a background singer for Alicia Keys and Mary J. Blige, decided to take a chance and step out on his own to pursue his passion of being the leading voice on stage. Paul, beat out fellow contestants, Juliet Simms of Team Cee Lo (Green), Tony Lucca of Team Adam (Levine), and Chris Mann of Team Christina (Aguilera). to become The Voice. As a winner of  The Voice, he will be getting a recording contract with Universal Republic Records and a $100,000 cash prize.

The show’s two hour finale was a hit as top stars such as Justin Bieber, Lady Antebellum, Flo Rida, and Hall & Oates, took to the stage. Some of the contestants that did not make it to the final four of the competition that include, Team Adam’s:Kim Yarbrough, Pip, Katrina, Team Blake: RaeLynn, Jordis Unga, Erin Willett, Team Christina: Sera Hill, Lindsey Pavao, Team Cee Lo: Cheesa, and NYC’s own, Jamar Rogers, offered their support to the finalists by performing with them on this big night.

Watch Jermaine Paul Sing ‘I Believe I Can Fly’