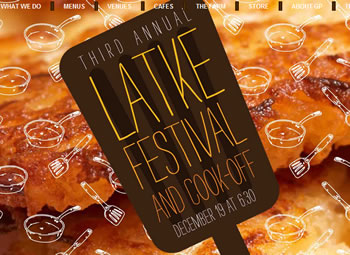 Celebrate Hanukkah at the Third Annual Latke Festival on December 19 at the Brooklyn Academy of Music (BAM). Watch as top chefs such as Saul Bolton (the Vanderbilt) and Julian Medina (Toloache) prepare creative riffs on the classic potato pancake. Tickets to the Latke Festival are $30.

If you have a latke recipe that you would like to enter into the festival, email it to Edible Brooklyn. You could win a chance to cook alongside top NYC chef’s and win a new Breville 5-quart stand mixer!