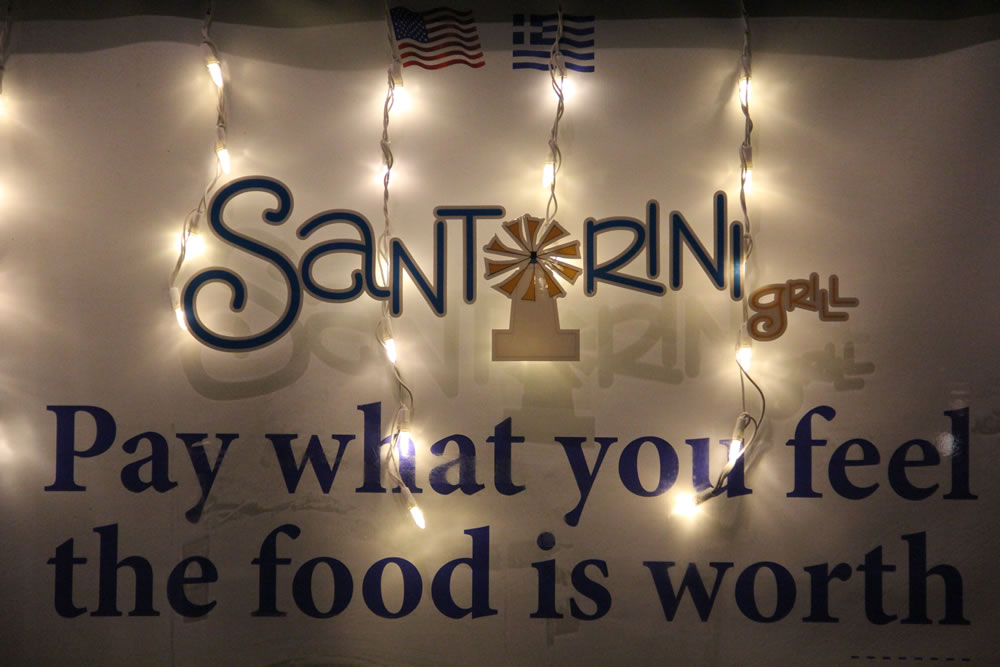 Santorini Grill is a cozy Mediterranean restaurant in Williamsburg Brooklyn that will be offering its patrons a pay-as-you-wish dining experience. Starting on November 4th until the end of the month, Paula Douralas of Santorini Grill will be treating her customers to her food for a price that is based on what they feel like giving.

November 4th is the day that Santorini Grill opened its doors for the first time back in 2007, which was also the night that Barack Obama was elected president. To mark their opening, Douralas offered a full Greek buffet at no charge to her customers. Three years later, she is choosing to commemorate her restaurant in similar fashion by not charging her guests for their meals.

In response to what she will do if people come in and decide to pay nothing, Douralas says, “That’s fine. If they’re hungry, let them do that. I’ve always fed people—the homeless, drug addicts, children—it’s what I do.”

“You know how much food goes to waste; it drives me crazy,” she adds. “And we all do it.” That’s the main reason she decided to take such a huge gamble—seeing a homeless person who is hungry, or those who are increasingly opting out of going to restaurants because they’re under-employed. Recently, she brought a man on the corner some food, and saw his eyes light up. It gave her the satisfaction that she’s in this business for. “That was worth more to me than all the dollars in the world.”

The deal does not cover drinks, take-out or delivery.

For the hungry, that may not have excess money to eat out, this type of pay-what-you-can restaurant is gaining popularity.

In similair spirit as Santorini Grill, The Soul Kitchen owned by Jon Bon Jovi will be doing the same. The lead singer of Bon Jovi, debuted his restaurant on October 19th in Red Bank New Jersey which employs the same philosopy as Paula Douralas. Bon Jovi says, “If you come in and say, ‘I’m hungry,’ we’ll feed you”.

The Soul Kitchen menu items include cornmeal-crusted catfish with red beans and rice, grilled chicken breast with homemade basil mayo and rice pilaf, and grilled salmon with soul seasonings, sweet potato mash and sautéed greens, many of which come from the restaurant’s adjoining herb and vegetable garden. There are no prices in the menu because it is up to the individual to pay what they can afford.

The hospitality of Douralas and Bon Jovi is unique and it’s nice to see people giving back to the community that they are a part of.