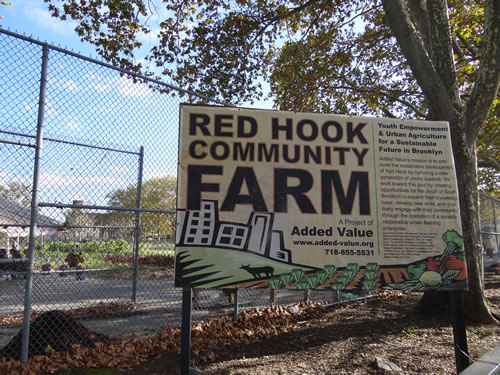 According to Earth Institute’s Urban Design Lab, New York City has 5,000 scattered acres of private and public vacant land suitable for farming–plus a roughly equal amount potentially contained in city housing projects, tiny street-corner parks, parking lots and rooftops. One of the organizations that has taken advantage of the available farm space the city has to offer is Added Value.

Added Value, is part of the growing urban farms in New York City. They’ve given back to the community and have successfully added value to a space that was a dilapidated playground. The transformation of this concrete lot to a 2.75 acre community farm has provided the neighborhood and local restaurants with fresh organic produce.

Since 2007, Added Value with the help of the community have created a farm that is a resource for food, as well as a place where the local teens can learn about all aspects of organic agriculture.

On October 22, they held their annual harvest. Kids were playing in the pumpkin patch and carving pumpkins, a Latin band was playing, the market was selling produce, tours of the farm were being given, and food was being served from iCi and The Good Fork which are restaurants in the area.

The Red Hook community which has a Fairway and Ikea which is right across the street from Added Value is growing and offering the neighborhood rural and city amenities.

Photo’s from the Added Value Harvest.