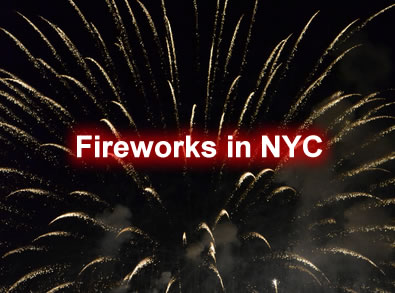 There are a number of different Firework displays that take place in New York City each year. One of the biggest and most spectacular fireworks in NYC, take place on the July 4th, courtesy of Macy’s. For 36 year’s, Macy’s has been lighting up New York Sky’s with their Independance Day celebration that is televised all over the world. This year, the fireworks will be set off on the Hudson River between 18th and 48th streets.

Coney Island will offer free fireworks every Friday from June 15th through August 31st, 2012. The best place for viewing the fireworks at Coney Island is on the boardwalk or beach between West 10th St. and West 12th St.

The fireworks schedule was compiled using information from the City of New York website.