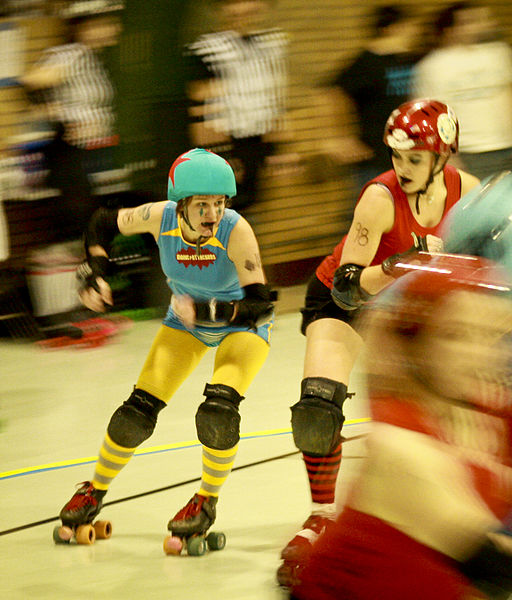 The Gotham Girls Roller Derby Championship is all set, as the Bronx Gridlock get ready to battle it out with the Brooklyn Bombshells in search of taking home the “Golden Skate”. The championship bout which is the finale to regular league play, will take place on October 29 at the Nat Holman Gymnasium.

The Bronx is the two-time defending league champions, and the Bombshells are in the finals for the first time in their history.

Gotham Girls Roller Derby, is New York City’s flat track roller derby league. The all-female league is comprised of some of the toughest women around. They are are super competitive and athletic with a will to win. Every aspect of how the girls play require agility, strength, speed, control, peripheral vision, communication, and teamwork.

If the only knowledge you have about the roller derby is watching Drew Barrymore’s movie “Whip It”, you are in for a night of real live action. Roller Derby is a contact sport played on roller skates, with helmets, elbow, and knee pads, used as protection while the players speed around the track. Each team has five members on the track at a time made up of “Blockers” and a “Jammer”. The goal of the game is to get your point scoring skater, which is the “Jammer”, to lap as many of the opposing team players as possible. It’s a physical game as the jammers and the blockers collide.

VIP tickets come with track side seating and all other seating is general admission. Children under the age of 5 are free. Alcohol is not permitted in the venue.

Previous: The Ice Rink at The Rockefeller is Open
Next: The Radio City Christmas Spectacular featuring The Rockettes