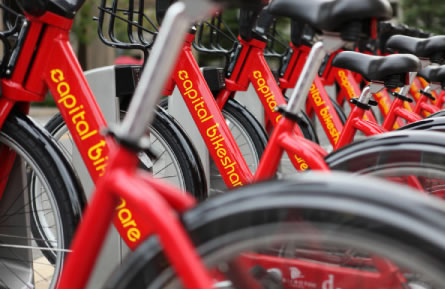 New York City is going to join other big cities across the world like Montreal, London, Frankfurt and Stockholm by expanding transportation and creating a bike share program.

The program will consist of 600 stations with 10,000 bikes located in Manhattan, Brooklyn and potentially Queens, Staten Island and the Bronx. Users of the service will be able to sign up for a membership or sign out a bike using their credit card. When you are finished riding the bike, you simply return it to a bike share station.

The bikes are built for stability and not speed. The project, that is funded by private sponsorship is open to suggestions about improving the service and for the next two weeks, New Yorker’s will be given the opportunity to test out how the bike share program is going to work.

Try this out and give them your feedback.

Bike Share: Bowling Green
Wednesday September 21, 12:00 – 3:00 p.m. at Bowling Green at the foot of Broadway at Battery Place in Manhattan. The bikes will be directly in front of the National Museum of the American Indian, on the south end of the park near the subway entrance. Map it

Bike Share: Union Square
Thursday September 29, 12:00 p.m. – 6:00 p.m in Union Square.There will be a demo of the program at North Plaza Union Square. Map it

Bike Share: Atlantic Antic
Sunday October 2 12:00 p.m – 6:00 p.m at the Atlantic Antic Street festival, at the corner of Atlantic and Nevins. Map it

Previous: Protest in New York on Wall Street
Next: Brooklyn Book festival Is On