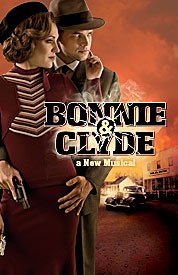 Bonnie and Clyde on Broadway

The story of Bonnie and Clyde is of two small-town kids from the middle of nowhere that became the biggest folk heros in America. They craved adventure and each other. This new musical will debut on Broadway on November 4th. Tickets are on sale now.

The musical is distinct from the film of the same name, but faithful to the personalities of the legendary characters that made the film such a large part of the American landscape.