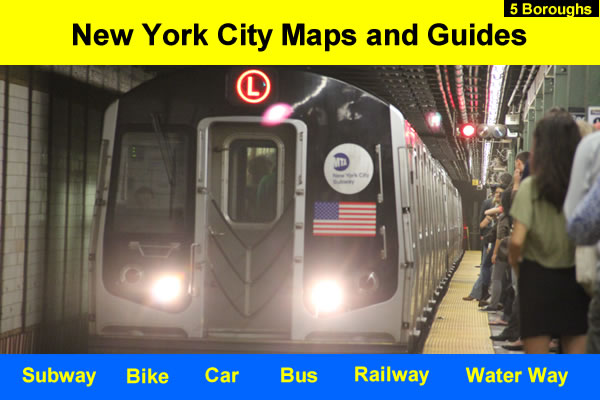 Navigating The Bronx, Brooklyn, Manhattan, Queens and Staten Island can be tough, even for a New Yorker. With the right maps and guides, getting around New York City is made much easier.  There are a number of Subway, Bus and Railway maps that you can use to travel around the New York area. Bike maps and guides are also handy to have as there are many trails and bike routes all over the city.

Street Maps
The New York Times Interactive Map is a great map of NYC that gives you a breakdown of where you can find hotels, attractions, shopping and nightlife in the five boroughs.

Subway Map
One of the best ways to get around the city is on the MTA subway. It’s an affordable, quick, and easy method of transportation that can get you to each borough. Download a free New York City Subway Map.

Railway Maps
Making a trip to Staten Island, Long Island, and beyond, is done best on the railway. These trains are suited for longer trips to places outside of the city. Download free railway maps for your destination.

Bus Maps
If you prefer to see New York City above ground instead of on the subway, the bus is another way to travel to each borough. Download free city bus maps.

Water Transportation
New York City has increased public water transportation thanks to the NY Water Way’s East River, Hudson River and Belford Ferries. Download the NY Water Ferry Map and travel NYC by the river. If you would like to travel to Staten Island, the Staten Island Ferry is free. Check the schedule for the arrival and departure times.

Bike Maps
A great alternative to taking public transportation in New York City is biking. Make sure to stay up to date with the NYC bike rules if you are going to hit the streets. If you prefer greener pastures, check out all the maps for trails in the city on the City of New York City Parks and Recreation site. Download a free bike map of NYC.

Car
If you chose to drive in the city, make sure that you become familiar with the rules of where you park. If you are not careful, you might come back to your car and see an orange envelope. In that situation, you’ve probably just received a parking violation that you can pay on the NYC.gov site.