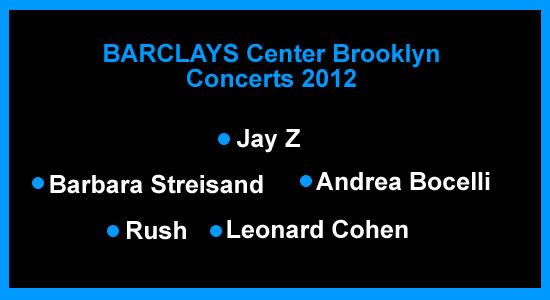 The Barclay’s Center will be a premier location for sporting events and live music concerts in Brooklyn. The landmark entertainment arena will feature concerts by big names such as Justin Bieber, Barbra Streisand, Andrea Bocelli, Leonard Cohen, Rush and none other than the stadium owner himself, Jay Z.

Jay Z
Shawn “JAY Z” Carter is a 3-time Grammy award winner, music mogul and the epitome of the “American Dream.” A New York Times best selling author, JAY Z is founder and chairman of Rocawear and his varied enterprises include the 40/40 sportsclubs, Translation Advertising, Carol’s Daughter skin line and being co-owner of the NJ Nets,.Jay Z is a partner in the Barclays Center and has been the driving force behind this entertainment venue.

Rush
The innovative rock band Rush will be the first rock concert at Barclays Center in Brooklyn. The concert coincides with their upcoming and highly anticipated new album, “CLOCKWORK ANGELS.” With more than 40 million records sold worldwide and countless sold-out tours, this Canadadian band made up of Geddy Lee, Alex Lifeson, and Neil Peart, is one of the most inventive and compelling groups in rock history.

Justin Bieber
With worldwide album sales in excess of 15 million units, Justin has dominated pop culture and social media for more than two years. He has over 43 million Facebook fans, more than 22 million Twitter followers, and over 2.7 billion YouTube views – he is far and away the most popular YouTube artist of all time, and received the 2012 Billboard Music Award for Social Artist of the Year.

Andrea Bocelli
Widely considered the most popular classical singer in the world, Andrea Bocelli will perform at Barclays Center in Brooklyn in what will be his only New York City performance of the year. After nearly a decade of performing annual concerts in Manhattan, Bocelli has chosen to make his Brooklyn debut at the Barclays Center.

Leonard Cohen
Leonard Cohen is a Canadian songwriter, musician and poet whose stunning body of original work has touched the lives of millions. His albums Songs of Leonard Cohen (1967), I’m Your Man (1990) and Dear Heather (2004) are rightly considered classics along with the beautiful singles “Hallelujah” and “Suzanne.” He has sold over 20 million albums, worldwide and published 12 books. With a career spanning five decades, Leonard Cohen has been inducted into the Rock & Roll Hall Of Fame (2008), and the Songwriters Hall Of Fame (2010), and is a Grammy Lifetime Achievement Award Recipient (2010).