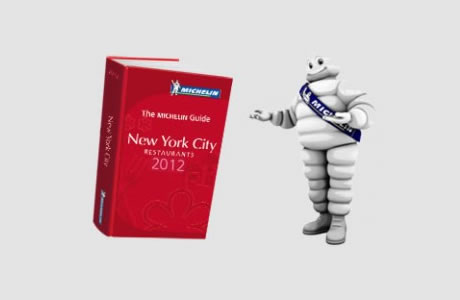 There are many fine dining restaurants in New York City but, this year only seven restaurants out of sixty two received stars.  Earning a Michelin star is international recognition for culinary excellence which is something that world class chefs and food-world insiders pay close attention to.  One star is very good in its category, two stars is excellent, and three stars is exceptional.

Every year, Michelin Red Guides which list all of the top restaurants in various cities like Paris, London, Tokyo, San Francisco, and Los Angeles are released. This year, the 2012 New York City guide became available on October 5th. The guides are known as the world’s most respected source of restaurant and hotel evaluations.

This year, restauranteur Danny Meyer’s Eleven Madison Park under Chef  Daniel Humm was a big winner, jumping one star to three in the Michelin review. Chef’s Table at Brooklyn Fare, which is an eighteen seat restaurant that is part of a Downtown Brooklyn grocery store earned three stars, along with Daniel, Jean Georges, Le Bernardin, Masa, and Per Se.

Restaurants in New York City and their Michelin rating for 2012:

Three stars are awarded to restaurants offering “Excellent cuisine, worth a detour“.

Two stars are awarded to restaurants with “Exceptional cuisine, worth a special journey“.

One star is “A very good restaurant in its category“.