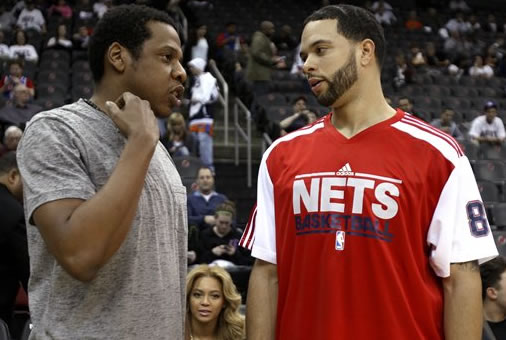 There were many other names that were toyed with such as Brooklyn Kings or the Brooklyn Bridges but, it was finally decided that the new official name for the NBA’s New Jersey Nets whose team will be moving to Brooklyn to be called the “Brooklyn Nets”. Jay-Z made the announcement during a press conference early Monday morning that was held across the street from the Barclays Center with developer Bruce Ratner and Brooklyn borough president Marty Markowitz. The team is also going to be changing their colors in 2012 when the new Barclays Center is complete.

Jay-Z hopes to make the new building in Brooklyn an entertainment arena and not just a place for basketball. He plans to open the arena with mega concerts.

“From the moment the Barclays Center became a reality, I knew this meant something significant for Brooklyn,” Jay-Z said. “This is where I’m from, I’ll always be Brooklyn, and opening this arena will mean more to me than anywhere else. I also look forward to opening night for the Brooklyn Nets (in September 2012). We’re going to create an atmosphere like only Brooklyn can.”